Temperatures are dropping and stink bugs are seeking a warm habitat for the winter. Your home is the perfect location, but if you’d rather not invite these pests to your garden or inside your house, there are steps you can take to make them less welcome.

Stink bugs (Halyomorpha halys) emerge in the early spring and mate from April to May. They lay their eggs on the underside of leaves in masses of 20-30 and they produce just one generation per year. Adult stink bugs can cause serious crop damage to vegetables and fruits as well as to ornamental plants. In the fall and up until the first frost, stink bugs begin moving inside to overwinter.

The best way to control stink bugs is to address the situation before they enter the home. If you can eliminate the bugs before they become established, you can save a good deal of money, time and trouble.

Before Stink Bugs Make Themselves at Home

In late summer and early fall, you can take steps to keep stink bugs out of your home. Hard freezes and the deep cold of winter will help keep the bug population smaller, so they will be easier to control in the spring if you have not allowed them to comfortably overwinter indoors.

If stink bugs do enter the home, don’t worry, this insect is only considered a nuisance insect to humans as they do not bite, sting or create structural damage. When threatened, however, they do emit a defensive odor that is very unpleasant and can permeate a room quickly. Fortunately, stink bugs will not procreate over the winter, so even if they are found in the house, they can be easy to control and an infestation is not inevitable.

After Stink Bugs Move In

It can be frustrating to see a stink bug in the house, especially if you have taken steps to try and keep them out. Fortunately, it is easy to remove them.

Using strong insecticides inside the home is not recommended because of the risk of contamination and harm to pets, children, houseplants and food. Since these bugs do not breed in winter, however, hand-picking any intruders will quickly clear out the unwanted guests, and next fall you can continue to stink-bug-proof your home with ease. 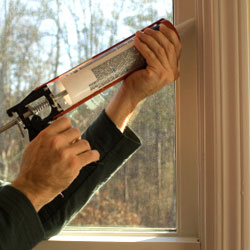 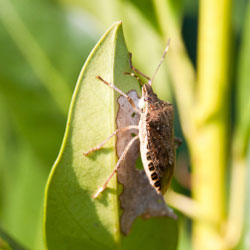 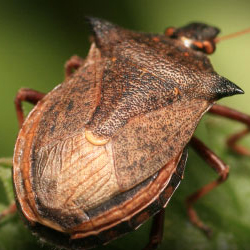